Every Fall semester, I get a 2 day break from classes. This year, we decided to head up to Minnesota to see the Hamer Clan. The last time we were in Minnesota was in July of 2007 (right before the bridge collapsed - which we may have contributed to by driving a van full of people across it numerous times). A lot has happened between 2007 and 2010, specifically Fletch. So of course Fletch had to go meet his Great Grandma!
We couldn't have asked for more perfect weather while we were there. Uncle Bill & Aunt Ginger now live on Lac Lavon in Apple Valley. Their new house is amazing and very accommodating. When you look out the back door, you have a fantastic view of the lake. This time of year all the leaves are changing color and the area is beautiful. Saturday morning, we got up early and headed to Fischer Croix Farms. YES, another farm! We just can't get enough. Before we did anything, we had to get a picture with all of the cousins. Once the required formalities were out of the way, we got down to business, picking apples. I had never seen an apple tree until that day. I had no idea they were so short. We picked mostly Haralsons and Honey Golds. We even saw some Cortland apples that almost looked purple. 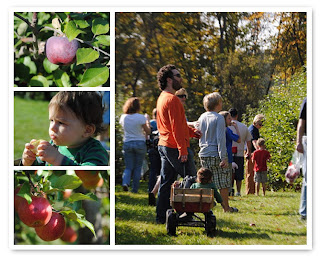 After we picked apples (and ate a few along the way), the kids took a ride on the tractor/train. Fletch has a serious love of trains. He was too small to go on his own, and we were too big to fit with him, so his cousin Emily was nice enough to take him along with her. After the kids finished the tractor ride, we hitched a ride on the tractor trailer ride to the corn maze. I have never done one of these. We have one at Cox Farm, but for some reason have never done it. We tackled the maze as a family. We lost a few people, but according to Daddy, there is always a 10% casualty rate. In the end, we all made it out alive.
After the farm we headed over to OCB (Old Country Buffet), not to be confused with OCD. I forgot how crazy it can get in a buffet restaurant. Dinner was much more relaxed, and the whole family came together for food and games. Aunt Gail came over and got to meet Fletch and hang out with us. We played Wits & Wagers until it was time for everyone to head home and put kids to bed.
Sunday, Fletch got to meet his Great Grandma. Fletch is Atom's Mom's first grandchild, but not Grandma Hamer's first great-grandchild. We had a nice visit and dropped off some pictures for Grandma to display in her shadowbox outside her room. Grandma Hamer thought Fletch was a cutie and she giggled at him quite a bit. He is quite an entertainer.
Monday, everyone else had to work. So Uncle Bill, Aunt Ginger, Cathy, Atom, Fletch and I went to the Minnesota Zoo. We didn't stay very long because Fletch got tired and cranky and Cathy and Ginger had other things that had to get done that afternoon. 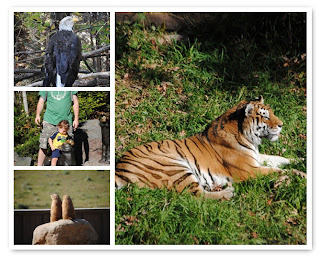 When we got home we had a yummy lunch and even played dominoes out on the deck in the beautiful weather. I've played Mexican Train numerous times, but never with a gorgeous view of a lake. We taught Uncle Bill and Aunt Ginger how to play. We played with some really old dominoes that belonged to Atom's Great Grandmother, and Aunt Ginger was very kind to give them to us.
Once Cathy's kids were out of school, we all met up at the Mall of America. It's the largest mall in the United States. We had been there last time we visited Minnesota, however we didn't get on any of the rides. Since they had kiddie rides, we took Fletch on those. He had a blast. 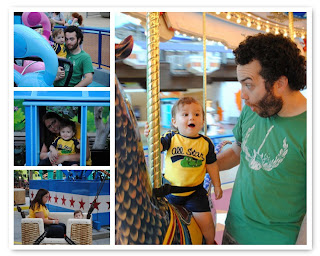 Ben, Louise, Fiona and Adele joined us at the mall as well. After we ate some dinner in the food court, Aunt Ginger offered to take Fletch home with them so the adults and big kids could ride the big scary rides. We are so grateful, because we had an amazing time. We rode just about every ride and did the ropes course too. By the time we got home we were exhausted from running around and laughing so hard.
Tuesday was our departure day, so we didn't do much but hang out and pack up. We got to the airport with plenty of time to spare, so we headed to the food court to get some dinner. I went to get Fletch a kids meal and when I came back to our table, I saw a blonde flight attendant seated at our table. When I got closer, I realized it was a friend from church. Kristin is a flight attendant for Delta. She wasn't on our flight, but her flight was leaving the exact same time as ours. Talk about a small world! 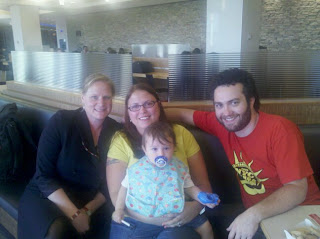 We got home safely and passed out as soon as we got to the house. We had a great time in Minnesota and had the best hosts and tour guides possible! Having fun with family is always a great time.
Brought to you by Mrs Chronic-Shock at 10/16/2010 01:25:00 PM