The Shock Circus Goes to Atlanta

Fletch, Mama and Daddy went to visit friends and family in Atlanta last week. We decided to drive since Fletch can't have a flu vaccine yet and we don't want him breathing in cooties from sick people on a plane. Yup...we were crazy enough to drive hundreds of miles with a four month old. Luckily, Fletch was amazing in the car (as long as Mommy sat in the back with him). He slept most of the way and was calm while he was awake. I think he handled the trip better than we did. We stayed with Grandma the first few nights: 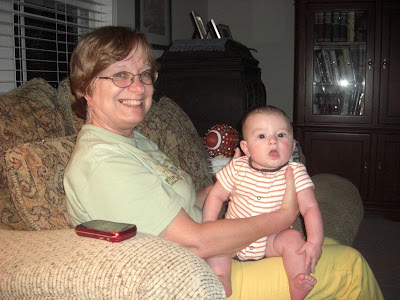 While we were staying with Grandma, we drove into the city to go to The World of Coca Cola. On the tour we saw a ton of Coca Cola memorabilia, some pop art, a short animated movie, and a giant polar bear. The best part of the tour was at the end when you get to try all the different drinks that Coca Cola makes from all over the world. There was only one that I would never sip on again and that's a drink named after my mother, Beverly. It tasted pretty nasty. We got to take a picture with the huggable polar bear: 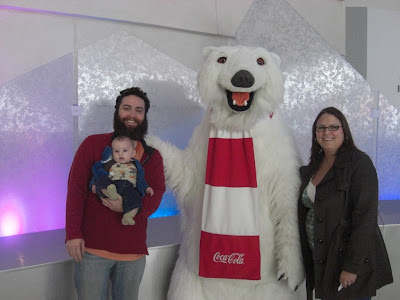 We then moved on to Grandpa's house. This visit was Grandpa's first time seeing Fletch, so he was super excited (as you can tell in this pic): 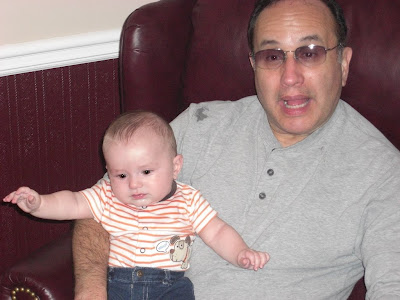 On Saturday night, Grandpa and Gammy Gena babysat while we went out with friends. The previous night, Fletch got to meet his future wife Quinn. I think Quinn rocked Fletch's world: 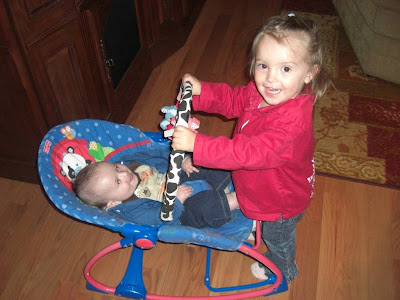 For grown-ups-night-out, we all went bowling. For the record, I won. It wasn't an impressive score, but I won nonetheless. Here is a group shot of the gang: 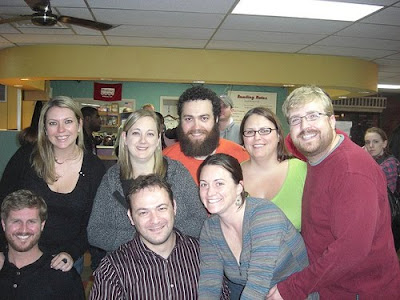 We found out Kim and T-bone are expecting a baby in May. We're excited for them and can't wait to see how T-bone reacts to living with a baby. Congrats again guys! Sunday was game day, the whole reason behind this trip to Atlanta. The Redskins played the Falcons in the Georgia Dome and we gathered everyone together to tailgate and watch the game. We all had fun eating yummy food and drinking tasty beverages. I got a shot of all the Shock boys (minus Uncle Chris who couldn't make it): 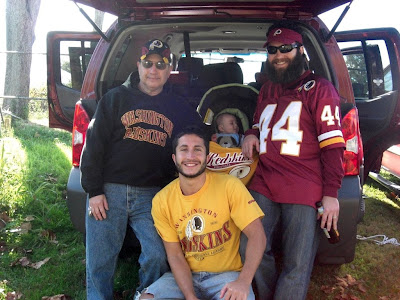 Too bad the Redskins were beaten by the Falcons, but we all pretty much expected that. On Monday, we went to take a tour of CNN. It was a pretty cool tour. We got to look in on the newsroom floor and where the news is filmed. We got to listen in on the control room. It was very interesting to learn how it all comes together. 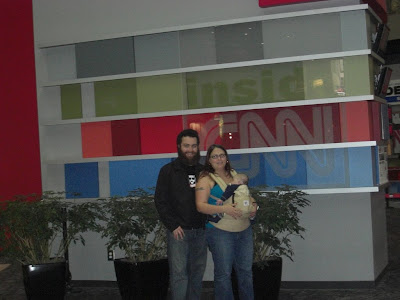 After the tour we decided to dine at The Varsity. This place is an Atlanta institution. It's a greasy spoon, but it was oh-so-yummy. We dined on cheeseburgers, chili dogs, onion rings and orange freezes. 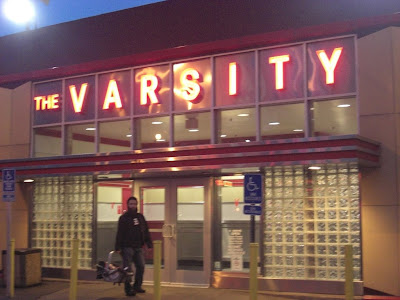 We were on vacation, so a little extra calories are part of the package. We even went to Sonic since we don't have them in our area. I love me a good corndog! We were sad to see our week come to an end and thanks to Tropical Storm Ida, we had rain and wind to drive back in. We had a great time with everyone and hope to get back to Atlanta next summer.
Brought to you by Mrs Chronic-Shock at 11/14/2009 11:03:00 AM No comments:

Fletch's 4 month well baby visit was last Friday. He received his second round of vaccinations, which is exactly like you would imagine it. The good part of the visit was getting the go-ahead to start trying solid food. We are starting off with some rice cereal. Mommy preemptively bought some last time she was at Wegman's, because she was excited to feed Fletch his first solid meal. When we got home from our appointment, we put Fletch in his new high chair and mixed up a bowl of ricey-goodness. Here is the result:

He is getting better at it every day. Once he gets the hang of it, Mommy will be making some veggies just for Fletch.
Brought to you by groovesocket at 11/02/2009 03:28:00 PM No comments:

Fletch received the sacrament of Holy Baptism on Sunday. This also happened to fall on All Saints day as well. Aunt Lisa and Uncle Steven came down from New York city to help celebrate. We also had some great friends come to mass to help us celebrate as well. After mass, we all went out to eat some yummy BBQ.
Here is the video of the baptism:
Brought to you by groovesocket at 11/01/2009 10:56:00 PM No comments:

We finally got around to splitting Fletch's first bath video into two so that we could upload it and not violate the  maximum length of 10 minutes. I embedded both videos in the original post found here:  Home Movies: Fletch's first bath.
Brought to you by groovesocket at 11/01/2009 10:40:00 PM No comments: