I get tons of daily deal emails every day, sometimes it just gets ridiculous. We used to go a little crazy and buy them all the time, but now we choose to be more frugal.  However, when I saw some really cheap tickets to Turkey Hill Experience, I figured we wouldn't be breaking the bank.

Turkey Hill is a Pennsylvania creamery. Down here in Virginia, we get their ice cream and their various iced teas. I have to say that both are pretty yummy. I am a sucker for ice cream and sweet tea. So when I saw the opportunity to go there and check it out, I said "Heck yeah!"

Turkey Hill is about a 2 hour drive from our place. We decided on last Sunday, and what do you know...it was raining! Apparently we need to take a road trip to the midwest, because everywhere we drive to, it rains. We could eliminate the drought in just a few road trips! Even with the rain, it was not too terrible of a drive. Once we got into Pennsylvania, I started seeing sunflowers everywhere, even at the rest stop. When we pulled up to the place, I was surprised that it was not part of the actual Turkey Hill factory. The Turkey Hill Experience is in a big building, which is shared with other businesses. This did not deter our desire for ice cream.

Once inside, there was a lot of reading to do. There is a lot of history about the area and the creamery. There is no official tour, it is done at your own pace and in whatever order you want. In our case, it was done at the pace and choosing of our 3-year old. We tried some of their different beverages first. I was surprised that their tasting consisted of one employee pouring little cups from jugs in a mini-fridge behind her. I guess I was expecting something like they have at World of Coke. I tried the cherry-pomegranate black tea. YUM.

Then on to the most important part, ICE CREAM. They did not have every flavor available (BUMMER) but what they had was yummy. I tried the Philly Graham Slam on my first go round, then on the way out I had the chocolate chip cookie dough. I really enjoyed them both, but they don't put enough cookie dough in their version. I don't think anyone can beat Ben & Jerry's cookie dough ice cream. (*Mental note...see if Ben & Jerry's has a tour)

The rest of the tour was a lot less uneventful. They had these touch screen area where you can design your own ice cream flavor and name it. Mine is called French Monkey. It has chocolate, hazelnut and bananas. It reminds me of the banana Nutella crepes we had when we were in Paris.

What would have been incredible is if they could make this for you so you could actually try it. Maybe that's asking a lot, but it would be pretty sweet.

There were lots of other ice cream making related activities throughout the tour, including milking a fake cow. Fletch was probably confused that water was coming out of the cow and not milk. It did not take us long to do the tour, which is why this place is really only good to do if you are already in the area. We had planned to hit up the train museum that was nearby, but we did not leave the house early enough. Since it was Sunday, all the Amish markets were closed too. It was raining the whole day, so that probably wouldn't have been all that fun anyway. It would also be a great place to stop if you were on a road trip through the area.  So we basically spent 4 hours in the car for an ice cream run, but hey, we got out of the house on a rainy day.

Laying Down the Law

I have been meaning to make Fletch a chore chart or "visual schedule" as they are now called for some time. I think his crazy 3-year old self needs some structure and visual cues of what he needs to get done each day. There are so many ideas out there on the interwebs, and I just could not make a decision on how I wanted to proceed.

We were at the big box toy store to replace Fletch's bubble gun, when I decided to check and see if they had chore charts. After finding an employee that actually knew where things were in the store, she directed me to the right place where I came across the Melissa & Doug Chore Chart. I am a sucker for a cute design, plus I knew this would save me a ton of time. I am a serious DIY-er, but now that I have a 3-month old in the house, time is a precious commodity. 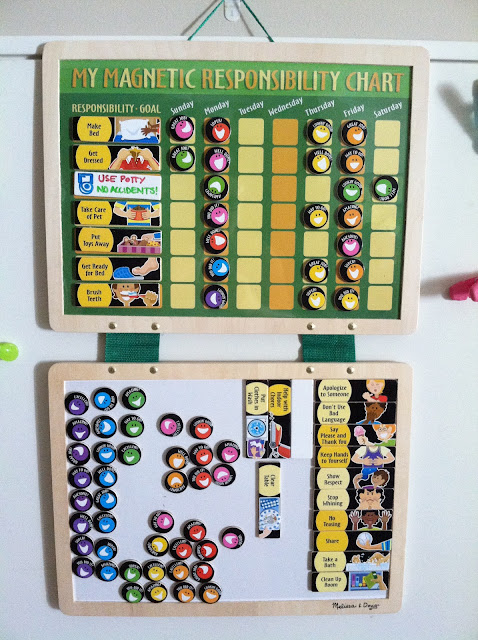 There are other chore magnets included that aren't shown, but those are geared towards older children. I like that they included stuff for the little guys and the big guys, that way we can adapt as Fletch gets older. They also included 2 blank white magnets. I used one to include potty goals.

If Fletch gets all 7 magnets for the day, he gets a quarter to put in his piggy bank and we'll do something special. For instance, last Friday's special treat was a glow in the dark bath. 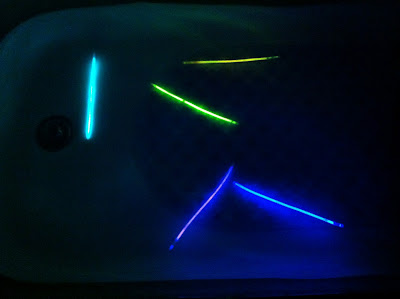 I had bought some glow-stick bracelets from the Target dollar section, not knowing what exactly I was going to do with them. On a whim, I remembered a Pinterest post. You just add a few to the bath tub and turn off the lights. Fletch thought they were totally awesome and played with them all night (and even took them to bed). They might have kept him up longer than I had liked, but oh well. We also purchased some glow in the dark bubbles, so that may be his treat for tonight.

In addition to needing some guided responsibilities...we really needed to reign in the TV time. I have been bad about letting him watch more than he should since Wyatt came into the picture (especially on those mornings when everyone was up way earlier than they should be). We would say "OK Fletch, this is your last show" and he would agree, but then of course later he would ask for another show, "Mommy...I want another show. This is my last show."

In order to limit our TV time, I have instituted TV Tokens! (I know TVs haven't looked like that in a long time, but I'm a sucker for nostalgia)

I knew those canned juice top lids would come in handy eventually! I did a little doodle and laminated them, then stuck them on to the lids. Fletch gets 4 tokens per day. I explained that once he uses up his tokens, there will be no more shows for the day. He doesn't quite understand how to spread them out throughout the day, but he hasn't thrown any fits about running out of tokens...yet. It's very easy to just say "No more tokens, no more TV." Eventually he'll catch on, and will save some for later in the day. In any case, it makes things clear cut and eliminates me from being the bad guy.

So that's what's new with Fletch. He starts pre-school in 3 weeks! I can't believe it. I know he is going to have a blast and I know I am going to enjoy my 3 hours of time with just one kid.

As for Wyatt....this boy just hit his 3-month growth spurt and he JUST KEEPS GETTING BIGGER! I know that is what babies are supposed to do, but jeesh. The boy is stretching out his 3-month clothes and we are about to put him in size 3 diapers! Wyatt even slept from 9 to 6am a couple of nights this week. That was AWESOME. Hopefully that continues :)

We are headed on an adventure this weekend, so stay tuned for some more family antics!

We spent my birthday weekend down on the farm! Atom's first cousin once removed, Sidney, invited us to his farm in Grantsville, MD. He and his wife Carolyn own a farm which is tucked away in the hillsides of Maryland, but very close to Pennsylvania and West Virginia. It is very close to Cumberland which is right at the point where Maryland, Pennsylvania and West Virginia meet.

We drove up Friday night after Atom got home. It never fails, whenever we jump in the car for a road trip, it rains! Luckily we arrived safe and sound (and in good time). We had no idea the beauty we would wake up to the next day since we traveled at night. 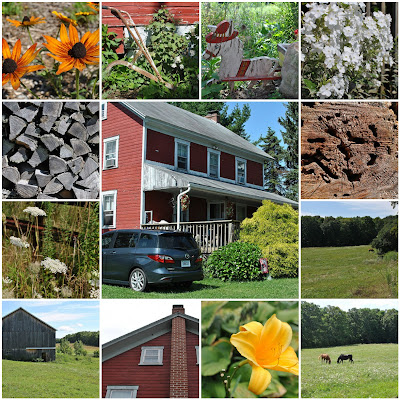 We were blessed with a gorgeous day. The air was crisp and cool and the sun was out all day. I was a little sad to find out we couldn't ride the horses, but we did get to see them up close and give them some head scratches. 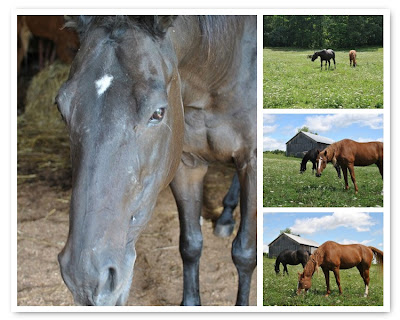 The mare's name was Ginger and the stallion was Casanova. They are both rescue horses. If I were a horse, this would be the place I'd love to retire to. Heck, I'm not a horse and it's still a place I'd like to retire to.

Fletch and Sid took the tractor out for a spin. Fletch was a natural tractor driver. I think it comes from his hours of practice at home with his toy tractors. ;) After a little down time, we went out into the garden to help Carolyn pick veggies from her amazing garden. Fletch had a good time digging for potatoes. Fletch could not ignore the giant mud puddle sitting by the side of the house. Neither could Solace! I didn't get a picture of the dog wading through it because I was too concerned with trying to keep him from drinking the muddy water. Solace was in dog heaven. He wandered around the farm, but always managed to come back safely.

Wyatt was in charge of being the cute baby. He did a great job. We had a yummy dinner that night and ate some of the veggies we picked earlier that day. You know we had a good time, when it only took Fletch 5 minutes to pass out at bedtime. It was a short weekend visit, but it was so nice to get away to such a beautiful place.

Since we drove up in the dark, we didn't know what we were missing. I had to snap a few pics on the way home! 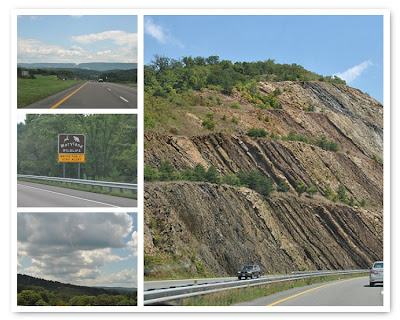 Many thanks to Sid and Carolyn for showing us an amazing time at the farm!