Moo at the Zoo

Up until recently, we had no idea there was a farm at the zoo. It is home to cows, donkeys, goats, chickens, bunnies and alpaca. It was very close to being shut down, but thanks to State Farm, they received a large donation to keep it open until 2016. They still need to raise about $100K. They had an event this past Sunday to celebrate. We are now FONZ members, so we were invited to come enjoy some free food and drinks and hang out with the animals before it was open to the general public.

Unfortunately, they ran out of the free Georgetown cupcakes and the Pinkberry fro-yo before we got any, but we did get some other goodies. It was so hot, I really didn't feel like pigging out on sweets anyway. After Fletch ate his free cookie, we went to check out the farm.

First we saw some Mediterranean Miniature Donkeys. They had the cutest little neighs. They were the perfect height for Fletch. He got to see them at eye level. Next up were the cows and an alpaca. You are allowed to pet any animals that come up to the fence. Lucky for us, one of the cows was within reach! I love the sweet face of cows. Especially those long eyelashes :) All of the goats were busy munching on grass to come up to the fence for a head scratch. Fletch got to pet a chicken, but there was such a huge rush of kids I didn't get to take a picture. I am surprised he even got a chance to do it! It's funny to see us city folk get so excited about common farm animals. I got to see and pet them quite frequently growing up in Texas, so I let Fletch and Daddy have all the fun. I did give the pretty black and white cow some love though.

After we were done petting and washing our hands, we went back up to see what kind of free goodies they were handing out. We snacked on Ben & Jerry's, Upper Crust Pizza and delicious peaches from Whole Foods. There was a merchandise tent and the proceeds went to helping the farm. We bought Fletch a panda pillow pal. Atom was skeptical, but Fletch is quite fond of the cuddly critter. I only caved since the money went to the zoo :)

Well we are smack-dab in the middle of summer! We have been trying to keep busy, but also keep cool. Lucky for us there are tons of things to do around here.

For the 4th of July, we headed to Great Meadows for an Independence Day celebration. We brought along some friends, the Tompkins, to help us tailgate and celebrate. We found out about this place through one of the many  coupon sites, so we figured we'd give it a try. Great Meadows is actually where they do equestrian competitions like steeplechase, and they even host the Gold Cup. We got there, parked and ate some yummy food and may have had a few beers. Then we decided to go look at the helicopters that were there (not sure who was more excited, Fletch or Daddy). We also stopped at the petting zoo to say hi to the animals. Along the way, Fletch saw some go-carts and had to investigate. After checking out all the stands and vendors, we headed back to the car to get ready for the fireworks. We were on top of the hill so we had a great view. Then the fireworks started. Fletch actually sat in his mini-camp chair and enjoyed the entire show. He was in little boy heaven with helicopter shows and bright, loud fireworks. Daddy is now back to working a job in an office far-far away, so Fletch and I don't get to see him during the day anymore. We really enjoyed spending time with him in the early part of the summer. However, I have been trying to keep Fletch occupied. I purchased a 5 hour block of play at an indoor soft play area. It is actually a martial arts school, but during the day they have open play with lots of balls, foam noodles, hula hoops, trampolines and soft play stations. Fletch loves running around since we don't have that much space at home. I don't have any pics because I am always in there playing with him :)

We found out that the county libraries have scheduled activities throughout the summer. Some of them are during Fletch's nap time, but we have been to one that was about bugs. We were read some stories about bugs, did some singing and dancing, and then got to color and create. There are some more on the calendar that I hope we can make it to.

We went back to the fountain last week to let Fletch splash around. We did have an ulterior motive though. We now have a Pinkberry less than a mile away! I got to try it on an outing with the girls, but Atom had not tried it yet. So we walked up to Fairfax Corner to let Fletch get wet and then go indulge in some frozen yogurt. YUM! Fairfax Corner now has a little train that drives around the shopping center for a mere $3. We did not ride it this time, but you have to see the name of this train. What the heck where they thinking? Yesterday Fletch and I went with our DeVoll family friends to do some fruit and veggie picking. We went to Hollin Farms in Delaplane, VA. It was a pretty drive through the Virginia hillsides to get there. They had a lot of good things for picking, and for the most part things were labeled you so you could find them easily (except the potatoes-which we found after we were all done). And then threw it on the ground after I took his picture with it! What a stinker. We grabbed some tools and picked some peaches right off the trees. In the end, we came home with some summer squash, a giant zucchini, half a peck of peaches, a pint of blackberries and raspberries and some string beans (which I cooked for dinner and they were DELICIOUS).  There were a TON of bugs and we had no bug spray :( No bites for Fletch or me, but I did get punched in the lip by a giant grasshopper. RUDE!

Fletch and I went to go explore the National Aquarium that is in the basement of the Department of Commerce building in DC. Before we did that though, we walked over to L'Enfant Plaza where Daddy works to have lunch with him :) We ate at Potbelly's in the underground shopping center. When we were done with lunch, Fletch and I walked over to the aquarium. Actually, Fletch was in the stroller and pretty much passed out right before we got there. He didn't get to see one fish :( I however got to enjoy it and snap a few pics. 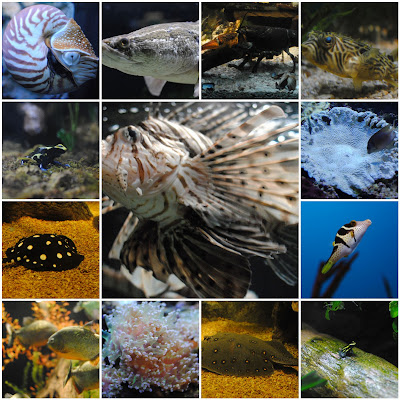 It was a pretty small aquarium, but what do you expect when its in the bottom of a government building? It was nice and cool and a great place to escape from the heat for a while.

We went as a family to the Folk Life Festival hosted by the Smithsonian on the National Mall. We have been before, but this was the first time taking Fletch. The 3 representatives this year were: Columbia (the country), Rhythm & Blues and the Peace Corps. Both Atom and I have friends that served in the Peace Corps, so we thought we should go check it out. We ate some BBQ from the Rhythm & Blues section and then wandered over to Columbia for a bit. This picture is of a woman from Africa who is making Shea Butter. They try to empower the women to create businesses of their own to support themselves and their families. That was my only picture I took the entire time. It was hot and there were a lot of people moving around in the same place. To top it off, I lost my wedding band somewhere that day. Sucks, I know. Good thing it was insured.

We still have about a month of summer before I have to go back to school (my last semester - WOOHOO). We plan on doing more library outings, more indoor playgrounding, some zoo trips and who knows what else the summer holds!

I have a couple of videos of Fletch showing off his agility, language and curiosity.

Here is Fletch climbing up into his high chair. He had been coloring at the table and I put him down to get ready to leave. Well he did not like that one bit, so when I wasn't looking he crawled up into his high chair. When I turned around and saw him in his seat, I was dumbfounded as to how he got in there. So I took him out and told him to show me how he did it, and then I video taped it :)


The second video was taken while I was downloading the first one. Fletch has figured out what I'm doing when I point that big square contraption at him..."PICTURE!" So I recorded him talking a little bit, but then he had to come it for himself.