All I wanted was a towel rack

A few months ago, Atom finally decided to repaint our upstairs bathroom. It was purple. I like purple, but the room that it was in was a deep tera cotta. So I was never very fond of the color combo. We found a nice bright citrus orange and decided to brighten it up. It was a pretty long process because we had to cover up a pretty deep purple with a light orange, but after a few weekends of painting and touching up it was all done and it was beautiful. "Was" you ask? Well...let me explain.

There is no hand towel rack near the sink. In fact, the only towel rack was behind the door on the opposite wall. So we bought a round towel rack to put up near the sink. Today Atom asked me where I'd like it hung, so I put it up and he made the marks on the wall. I left him to install the towel rack so I could start vacuuming. Next thing I know, I hear screaming. I turned off the vacuum and Atom was screaming my name. The first thing that came to mind is that he hurt himself, but after I bolted up the stairs I found him getting sprayed in the face with a powerful stream of water. While he was drilling a hole, he accidentally hit a water pipe.

There was some initial panic on my part, but then I had to think fast. While Atom held a bucket up to the jet stream of water, I ran over to our neighbor's house. He came over and showed me where the main water line cut off valve was. Unfortunately, it wasn't the main water valve that Atom hit. He actually drilled a hole into the emergency water sprinkler pipe. The water was coming out with such force, it sprayed across the bathroom and into the shower. It was just a tiny hole as you can see: 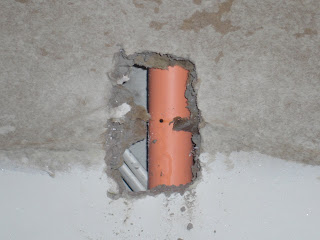 We had to call 911 to get the fire department to come out and turn off the sprinkler valve. That also included setting off the fire alarm in the entire building, which is incredibly loud and ear piercing. Luckily I had just put the dog on the porch, otherwise we would have had a freaked out doggie howling and cowering in the closet. Here is the aftermath: 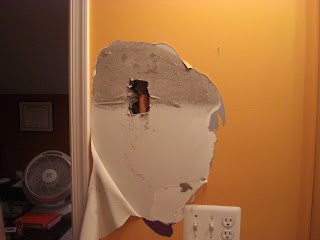 You can even see the root of all evil, aka the towel rack in this picture: 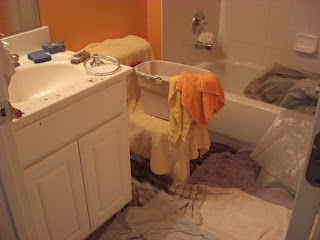 This just happens to be the bathroom in the guest bedroom. One of the reasons we decided to paint it, was because we have guests coming and we wanted it to look nice. Thank goodness we have three bathrooms in the house. So after all the commotion, this baby still refuses to make a move and get out. Hopefully we didn't scare him from coming out :)
Brought to you by Mrs Chronic-Shock at 6/23/2009 07:29:00 PM