Our Family is Complete

In case you haven't heard...we have a new baby! That's right, Wyatt Rhys Shock came into the world on May 14th, 2012, weighing in at a whopping 9 pounds 5 ounces. He was 21 1/4 inches long. We were not expecting such a big baby! It probably explains why I felt so much more this pregnancy, while he was in and coming out.

I started having contractions around 4:30pm on the 14th. I was just sitting on the couch reading when they hit. I had a few false alarms, but these were way more intense and continued to get even more so. Luckily Atom was home and done working for the day. We started calling in the cavalry to make sure Fletch and Solace were taken care of, dropped them off with the Tompkins (thanks again guys!) and then headed to the hospital. It was about 6:30 when I got checked in. I was at 3.5 cm with regular contractions, so I didn't get sent home this time! It took some time to get my epidural because everyone decided to have a baby at the same time. However, I still had a lot of sensation even with an epidural. I almost felt like it wasn't working, but apparently I was just progressing very quickly. At 10 pm I was at 5 cm, and when the nurse checked again at 11 I was at 10 cm! So it was time to push that baby out, and out he came at 11:32 pm. The first thing everyone said was, "That's a big baby!" Not only was he big, he also decided to come out with his arm and elbow pointed up and across his body. Lucky for me, I did not end up with any bodily injury from the delivery. However, I am glad to say I won't have to do that again!

Wyatt had a full head of hair just like his big brother (and he still does). That's not where the similarity ends! Wyatt looks exactly like Fletch did when he was born! Check out the resemblance:

Isn't that crazy? I get to watch Fletch grow up all over again! Lucky for us, Wyatt ended up with dimples too :) At 4 weeks, I'm starting to see a little difference in their appearance, but I won't be fully convinced I'm not suffering from deja vu for a few more months, when Wyatt will start looking more like himself.

We are slowly adjusting to life with a baby again. I forgot about all those sleepless nights! Mother Nature probably does something to your brain to help you forget. Breastfeeding is going much better this time around, and Wyatt is all-bewbs-all-the-time. I am betting on an 11 pound baby this Friday at his 1 month appointment. It is hard to get used to the notion that life revolves around a baby again. We have gotten cabin fever more than once.

Fletch has been an amazing big brother so far. He is very sweet to Wyatt, constantly giving him kisses and saying "Hi baybeeeee." He does not like it when Wyatt cries and usually demands I do something immediately. Sometimes he won't let Daddy help Wyatt and demands Mommy does it. I hope they end up being the best of friends. If not, at least we have these days to fondly look back on. A 365 project is already underway for Wyatt. I couldn't possibly not do one for him, considering how great Fletch's turned out to be. I will probably have a hard time handing over their book to them when the time comes. I also have some major digi-scrapping to do for both Fletch and Wyatt's baby books. I did get around to making Wyatt's birth announcement that I will frame and hang in his room, like I did for Fletch. 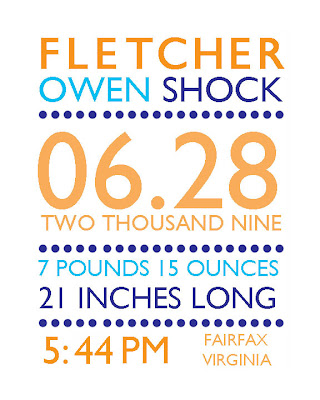 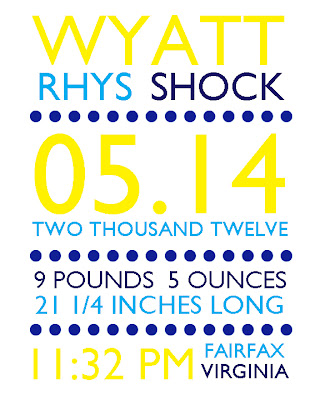 There it is...our family is complete :)